Unity’s Time class is an easy way to get the relative time. You can find the time since the app started with Time.time or the time between frames with Time.deltaTime. But what if you want to know the absolute time? You may need to display a clock to the user, send a timestamp over a network, or record when a game was saved. This is where System.DateTime comes in. It’s powerful and offers so much functionality that it’s natural to worry about about how slow it’ll be. So today’s article puts it to the test to find out how much time is being spent in operations like DateTime.Now which gets the current date and time. Is it quick enough that you shouldn’t worry? Read on to find out.

The docs for DateTime tell us that it has tons of features. Most programmers stick to a few core functions and that’s what I’ll be testing today.

The first is the static Now property that returns you a DateTime representing the current date and time. This has some great advantages over Time.time. First, it’s not just a snapshot of the time at the start of the frame. It’s actually up to date as of the exact time you call Now. It also returns you a full DateTime, meaning you get the absolute date and time, including milliseconds.

Second is the AddSeconds function, one of the many AddX functions for advancing the DateTime by some amount of time. One common use for these is to transform an offset into an actual DateTime. For example, if you have a UNIX timestamp it is the number of seconds since January 1, 1970. You can make a DateTime for that date and then call AddSeconds on it to get the actual date.

Third is the reverse of the AddX functions: subtracting two DateTime objects to get a TimeSpan. This represents the amount of time between them, and it easily queried to see how long that is in seconds, days, and so forth. Given that calendars are really complex and include things like leap years, this is a really easy way to check how much time has really elapsed between two DateTime instances.

Now let’s take a look at the test: 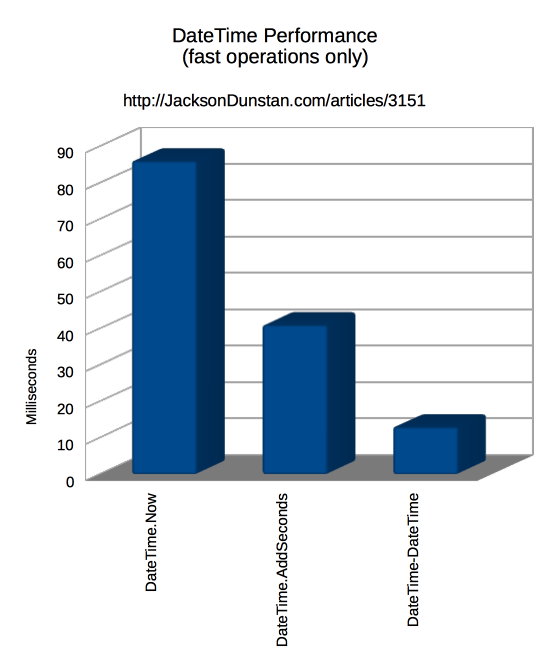 There are some pretty big speed differences between these functions, but they’re not really meant to be compared apples-to-apples. They’re unique operations, not alternatives for each other. What’s more important is their individual performance in an absolute sense.

To examine that, let’s consider that each operation was run one million times. This means that the slowest operation by far, ToString took about 0.001652 milliseconds. That’s really not much time, even if it took much longer on a slower CPU. The other operations take one twentieth of that time, which is pretty much negligible.

The takeaway is that as long as you’re not performing thousands of DateTime operations per frame, you’ll probably be just fine. It’s a pretty quick API, so go ahead and use it when you need absolute times.

Have you had any interesting come up when using DateTime? Let me know in the comments!