Loop Performance: For vs. Foreach vs. While

Today’s article expands on the previous loop test article to find out which kind of loop is truly fastest. Read on to find out!

For today’s test I started with the previous test and made a few modifications. First, I took Johnny Boy’s suggestion and added a while loop in addition to for and foreach.

Second, I took kzarczynski’s suggestion and made all the loops actually do something with each element of the array or List. Inspired by his articles, I switched from a plain object to a Counter class with a Value field I could access. Each loop now increases a sum local variable by the Value field to force the VM to actually fetch each element.

Third, I moved the List creation and access to after the array and related tests were done. This should help a bit to make sure the CPU cache is primed equally for each set of tests. 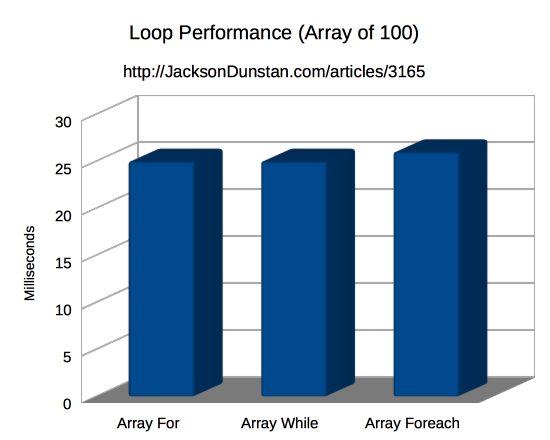 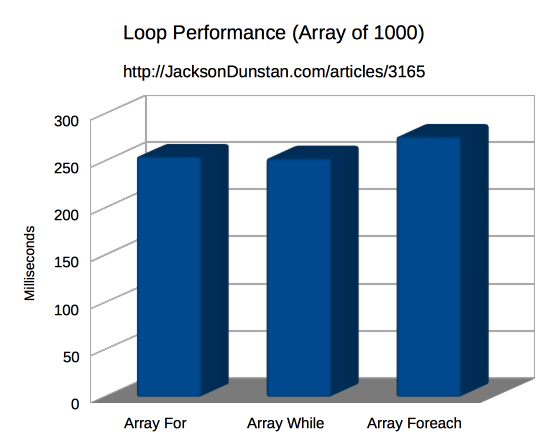 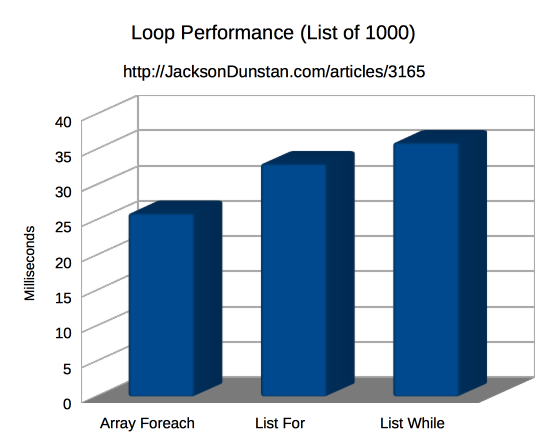 The results have changed quite a bit since last time! I suspect this is largely due to the switch to using the elements, but it’s tough to know for sure. In any case, the array tests now show almost no difference between the three loop types for 100 and 1000 elements. The for loop is still strangely slower than the others for 10 element arrays, but the numbers are so small that it’s possible this is due to other reasons such as that test running first on a colder CPU cache.

The List tests have changed a little, too. Rather than foreach being massively faster than for, it’s a much closer race. The foreach loop is still fastest regardless of List length, but not tremendously so. Still, beware the garbage creation that will take place when using foreach on a List. That garbage will need to be collected eventually and you’ll pay the cost at that point.

The overall takeaway here is that loop type doesn’t really matter for arrays. For List, use for or while to avoid garbage creation. It’s unlikely that the speed penalty will matter much but the eventual GC hit will be killer.

What’s your preferred loop for arrays and lists? Let me know in the comments!