While little utilized, C#’s struct type can come in really handy sometimes. Today’s article shows how to use it to get a lot more mileage out of modern CPUs’ caches to really boost your app’s performance. Read on for some quick tips!

The struct and class types seem really similar at first glance, but they’re represented very differently behind the scenes. One way this shows up is how arrays of each type are allocated in memory. With classes, an array is allocated with enough space to hold only pointers to the class instance objects. Those instances are allocated somewhere else. So an array of 10 classes will be about 80 bytes (8 bytes per pointer) all one contiguous block of memory, but the class instances will be located in memory somewhere else.

This means that as you loop over the array you are referencing the pointer in the array block of memory and then referencing the object somewhere else entirely. With each iteration you jump around arbitrarily in memory to find each object. While this is still much faster than, say, reading from a hard drive or SSD, it’s not nearly as fast as it can be. Enter struct.

With an array of struct, the array is allocated as a block big enough to hold all of the structs, not just pointers to them. As you loop over it, you read sequentially through this whole block of structs. A CPU loves this type of code because it loads large chunks of the array into its caches (e.g. L2) and your loop keeps reading straight out of the cache. This can be an order of magnitude faster than reading from RAM, but that’ll vary a lot by type of CPU.

To demonstrate, here’s a quick script that uses two types: PointStruct and PointClass. Each just holds two ints: X and Y. The script makes a large array of each and loops over them adding up their X and Y fields. In the end, the loop times are displayed on screen. 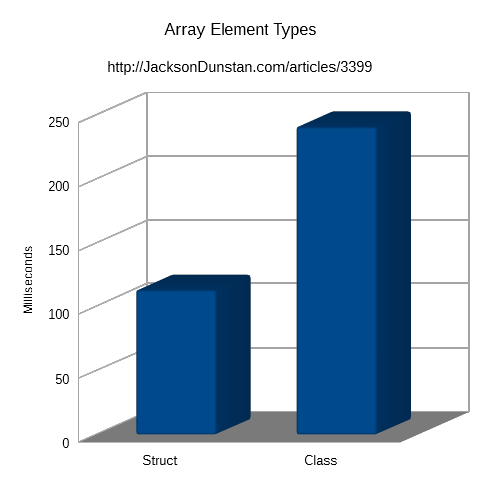 Keep this in mind next time you need to do a bulk operation on a lot of data. Using a struct just might speed things up a lot! If you’ve done this before, let me know in the comments how it’s worked out for you.