Programming in high-level languages like C# often presents the illusion that the CPU is only capable of a few primitive operations like “add,” “multiply,” “push,” “pop,” and “move.” After all, those are the primitive operations that we write all of our C# code with. The reality is quite different. Modern CPUs have hundreds of instructions for tons of special-purpose operations. Entire algorithms in C# are built right into the CPU and can be executed with one instruction. Today we’ll look at some of these exotic instructions as a reminder of what CPUs can really do and see how we can tap into this potential.

Nearly every relevant CPU these days is either an x86 or ARM variant. It’s well worth our time to get to know what the CPUs that execute our code can do. Intel and ARM helpfully provide PDF documents describing every single function for x86 and ARM, so it’s easy to browse through them. Many are obvious instructions like “add” and “move,” but many more are quite interesting and powerful for practical purposes. Some general-purpose instructions like these include:

Then there’s a whole ton of instructions that fall under the SIMD umbrella term. The acronym stands for “Single Instruction, Multiple Data” and allows us to perform the same operation on multiple variables in one instruction. For example, we can add a vector to another vector in one instruction rather than executing four addition instructions. This is made possible because the memory of these vectors is laid out precisely as X then Y then Z then W so CPUs can assume an ordering and perform the operation efficiently. The same goes for tons of other operations like multiplication, division, etc.

Beyond SIMD there are even more specialized instructions for exceptionally common and well-defined algorithms. For example, modern CPUs include support for cryptography directly on the chip. So there’s no need to write an algorithm using a bunch of other instructions when you can simply execute one instruction to encrypt or decrypt a block of data with AES or hash with SHA1 or SHA256. The Burst compiler doesn’t aim to support cryptography instructions, so we’ll still need to call into C or C++ code to execute these.

To illustrate the point, let’s use x86’s aesenc instruction to perform AES encryption. This has been available on x86 chips by Intel and AMD since 2010 as part of the AES-NI instruction set. This includes AMD’s Janguar chips used on both Xbox One and PlayStation 4. Likewise, ARM chips have been supporting AES since 2011 when the 64-bit ARMv8-A architecture was released. This includes every iPhone since the 5S and many Android phones such as the Samsung Galaxy S6.

Let’s start out by writing the C code that uses these special instructions. This code will simply AES-encrypt the same 16-byte block of data over and over to gauge performance. This isn’t really a productive use of CPU time, but it does test how fast the aesenc instruction is. To do this, we’ll call the _mm_aesenc_si128 compiler intrinsic, which is used just like any other function. We’ll also use the 128-bit integer data type __m128i since blocks and keys are 128 bits in the AES algorithm. The same goes for the decryption side.

Compiling this in “release” mode with Xcode 9.3 and the -maes compiler option (to get access to AES-NI), we get the following assembly output:

These are really simple functions that are basically just loops that call either aesenc to encrypt or aesdec to decrypt. This should perform very well, but we’ll need to try it out below to see.

Now let’s write the C# version of this, including the benchmarking code to measure performance. We’ll use AesManaged, the C# implementation of the AES algorithm and call CreateEncryptor and CreateDecryptor to get ICryptoTransform interfaces that can perform the encryption and decryption. Then we’ll call TransformBlock on them repeatedly, just like the above loops in C.

It’s worth noting that this is a little unfair to the C# side since interfaces aren’t strictly necessary and there could be a TransformSingleBlock that specialized to only encrypt or decrypt one block of data. We’d have to find an alternative AES implementation or write our own in order to make this happen though since we don’t control the .NET APIs. 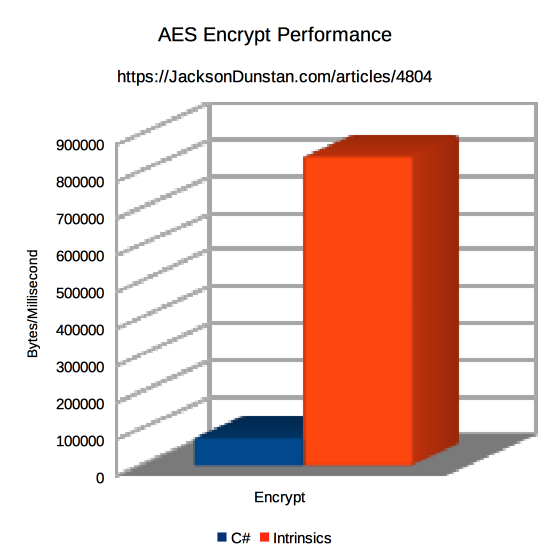 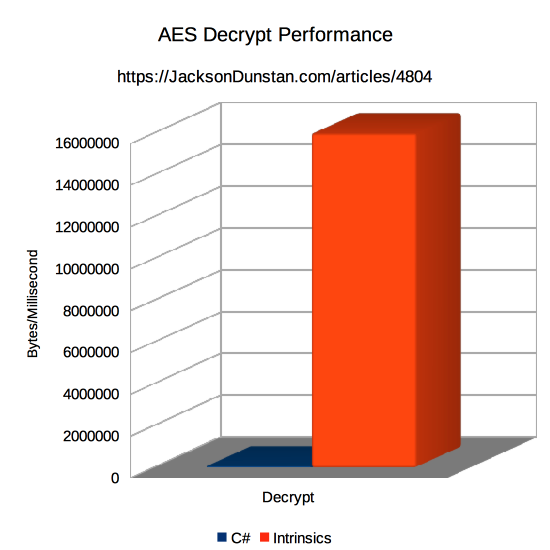 C# is very much outperformed for both encryption and decryption by the combination of P/Invoke, the C compiler, and intrinsics that gain direct access to the special-purpose CPU instructions. Encryption is 11x faster than C# and decryption is 269x faster! Again, the test is somewhat unfair as the C# side could be optimized further, but it illustrates the wide performance gap between algorithms implemented by general-purpose instructions like “add” and “divide” and algorithms implemented in the hardware and executed with a single instruction.

Implementing this test including the C code took all of a few minutes, so it’s well within our reach as Unity programmers. It’s worth our time to peruse through the available CPU instructions and gain some familiarity with them. You never know what gems you’ll find there!