Which is the fastest kind of C# function in Unity? There are several to choose from: regular old instance methods, static methods, delegates, and lambdas. Is there any performance reason to choose one over the other? Today’s article answers just these questions by putting each type of function to the test. Read on to see which is fastest and which is slowest!

Just like AS3 functions in Flash, there are several types to choose from. Here are the candidates for C#:

The first two are normal, but the latter two are a bit tricky. In order to be called they must be saved to a delegate-typed variable. The standard System.Action and System.Func are common options, but you can define your own like I did above.

Now let’s put each kind of function to the test by calling them a lot of times. Here’s the test script: 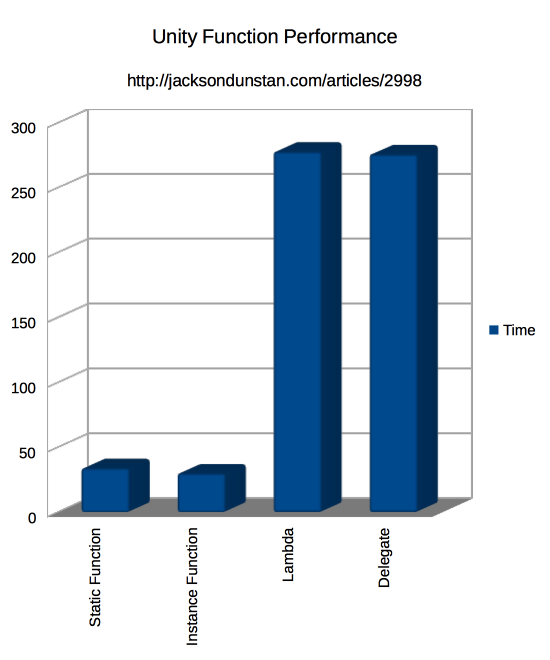 These functions don’t do anything, so these results just show the overhead of calling the function, not the time taken by the actual work the function should do.

So you’ll probably never see any slowdown due to lambdas or delegates, but if you happen to be calling them a lot then you can optimize by switching to instance functions or static functions.

If you know of any other types of functions I missed or have any experience with real-world slowdowns due to function call overhead, feel free to leave a comment!