Last year I introduced a Unity-based model-view-controller (MVC) design pattern and in the many comments on that article, a theme arose. The “model” part of MVC is arguably not necessary since Unity stores so much of the data itself. Today’s article takes that theme and elaborates on it to create and introduce a new Unity-specific design pattern. Read on to see how this adaptation of MVC works!

The MVC pattern described in the last article looks like this: 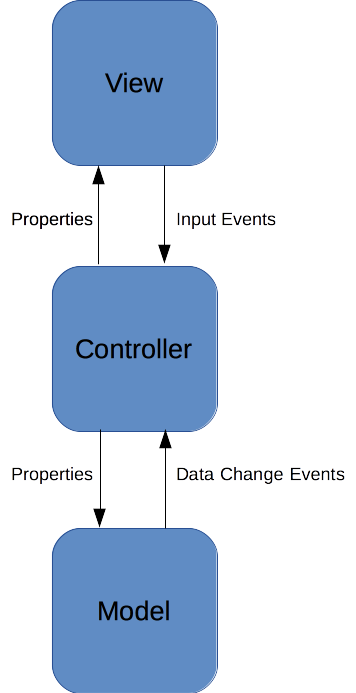 The view is a MonoBehaviour whose responsibilities are input (e.g. buttons, touch) and output (e.g. graphics, sound). Input is exposed by events. Output is by functions. The view performs no logic such as AI or scoring points.

The model is not a MonoBehaviour. It’s responsible for storing the data representation of the object, such as position and health. It allows access to this data by properties and dispatches events when the data changes. It also performs most of the logic, hence the phrase “fat models, skinny controllers.”

Some readers of this pattern found it strange that the model would store data such as an enemy’s position because Unity is already storing this in the game object’s Transform. Why store it twice and go through the trouble of synchronizing it between the view and the model? That’s a fair critique of the MVC pattern as described in the last article. It’s also the reason for today’s new design.

Here’s how the MV-C pattern looks: 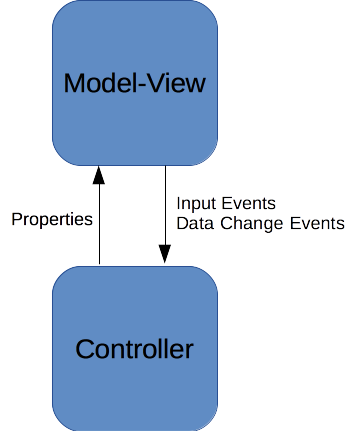 The model and the view have merged into a model-view, hence the name “MV-C”. It’s a MonoBehaviour that handles input and output as well as the data representation of the object. Unlike the models of MVC, it doesn’t perform any logic.

Now let’s see this pattern in action. Again we’ll implement a simple enemy, but with a couple of changes. First up is IEnemyModelView, the interface that the controller uses to access the model-view, and some associated event classes:

Now let’s see how the model-view is implemented as a MonoBehaviour:

One thing to notice here is that the model-view doesn’t have an explicit reference to the controller. It doesn’t know which class is taking care of the logic. It just knows that input happened so it should dispatch an event, the output functions and set properties got called so it should render something, and which data makes up an enemy. That includes data that Unity is already storing, like transform.position. Most important is that absolutely no logic appears in this class except input handling and rendering.

Next up is the EnemyController:

Notice that the controller isn’t a MonoBehaviour, nor does it reference one. It uses the model-view via the IEnemyModelView interface. We’ll see why this is important soon.

That’s it for the runtime code! However, one big advantage of this approach is that it makes it very easy to unit test all of your logic. All the logic is in the controller, so you really just need to make a fake model-view class implementing the model-view’s interface and give it to your controller. NSubstitute, which comes with Unity Test Tools, includes that along with the NUnit testing framework.

Let’s look at just a couple of tests for the very simple enemy controller above:

If you want to try out this example, including the unit tests, check out the GitHub project.

That wraps up today’s introduction of the MV-C design pattern. What do you think of it? Let me know in the comments!