How to Write Faster Code Than 90% of Programmers

Most programmers write code for an abstract computer. The thing is- code runs on a real computer that works in a specific way. Even if your game is going to run on a wide range of devices, knowing some of the common features can speed up your code 10x or more. Today’s article shows you how!

Broadly, all modern computers have the same configuration. They have a CPU, a GPU, and RAM. The CPU also has two or three levels of cache: L1, L2, and L3. Those caches are used to speed up RAM access because it is so slow. Exact numbers will vary by device, but according to this site here are the rough speeds:

Unfortunately, most programmers never think about this. For example, consider languages like C# where almost everything is a class allocated in RAM by the VM. Your class reference is essentially a pointer to a random location in RAM. An array of class instances therefore looks like this in RAM:

Each of these entries is a pointer: a memory address. When you loop over these class instances and access them you’re essentially visiting random locations in memory. What are the odds that this random memory location is in one of the CPU’s caches? Virtually zero.

You see variations of this code all the time. Almost everything is some kind of class and almost every container—List, Dictionary—is looping over instances of those class. It’s rare in C# programs to see any code that acknowledges the existence of CPU cache.

So what if you wanted to take advantage of the CPU cache? I figure this would put your code in the top 10% in terms of performance, purely based on my experience reading a variety of code throughout my programming days. Fortunately C# is friendlier in this respect than languages like Java or AS3. It often comes down to using struct instead of class.

Let’s see how this looks in practice. The following script has a ProjectileStruct and a ProjectileClass each with a Vector3 Position and Vector3 Velocity. It makes two arrays of them, shuffles them, and loops over them calling UpdateProjectile for each one. That function just moves the projectile’s position according to a linear velocity: projectile.Position += projectile.Velocity * time;.

Note that this is a similar test to this article but with several important differences. 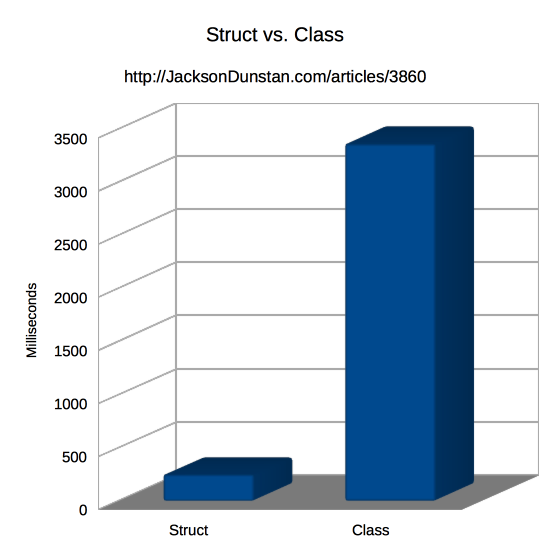 As predicted, roughly, by the CPU cache and RAM access times, we have a 13.46x speedup by using cache-friendly structs instead of classes. That’s a huge win! Who wouldn’t like their code to run an order of magnitude faster? By organizing your data in cache-friendly ways, you can realize huge performance increases over almost every C# programmer who sticks to the default, class-oriented programming style.

It’s worth noting that just using the CPU cache still leaves a ton of performance on the table. For example, you’ll need to use multiple threads to take advantage of all the CPU’s cores. You’ll need to max out the GPU, too. Games often do this with graphics rendering, but increasingly there is more general-purpose work to be done there with the likes of compute shaders. Those are topics for another day.